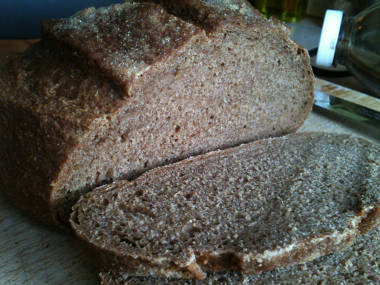 I forgot that I used to put molasses in my bread. It just sort of disappeared, probably as I started focusing on the grains more. It was time to bring it back. That and some coconut flour as it's just been sitting at the top of the cabinet for over a year now.

I initially mixed the water, molasses, yeast, oats, coconut flour, and some of the flour. I used more than a cup of water because the coconut flour is super absorbent. It did its thing all day covered with plastic wrap in a metal bowl, and the next morning is when I added all the rest, coating the slightly kneaded ball with some oil.

Preheated the oven, formed the loaf, baked for 10 minutes at 500°F and then 25 minutes at 400°F. When it came out, I brushed on some more grapeseed oil. Not olive this time because I didn't want floral aromas. Good stuff.

I've been moving toward spelt more and more in recent months, shying away from wheat. You may notice that this bread is only 16.7% wheat by volume, not counting the liquids. I guess I want to experiment more. I bought some potato flour this past weekend. Haven't used it yet, but I expect I'll put it in a pizza crust first.