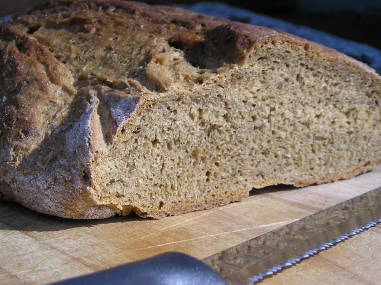 A homebrewing friend of mine named Ben brewed some beer recently, and I was lucky enough to be there before he threw the spent grain into the compost pile. I've known for a while now that the spent grain can be used in bread, but I've never tried it. There was a lot of grain left over, so I only went with four plastic bags with 1.5 cups of grain in each. I tossed them in the freezer because I wasn't intending on using it all anytime soon.

A couple days ago, I took one out and put in the fridge to defrost. I decided to bake yesterday, so in the late morning, I took out our crappy food processor and tried to mince the grain. It didn't really work, but I figured that was ok. I measured the grain again. What started out as 1.5 cups was now 1 cup. Obviously the food processor had some effect.

Ben tells me the grain he used was "mostly German two-row malted barley. Standard base grain - nothing special, but there was 10% of malted Rye grain and 5% special roasted Caramel Belgian [wheat] grain." To summarize, it's 85% barley, 10% rye, and 5% wheat. I assume the wheat wasn't malted like the barley and rye.

Before I continue, here are the final ingredients and measurements. I made this up as I went.

I mixed the water, yeast, and molasses and let it sit for a bit while I fiddled with the food processor. I added the molasses because Ben said the grain would be pretty tasteless. Then I dumped in the grain. I think I covered that and let it go for a short spell. Could have been 15 minutes, could have been an hour. Who knows? When I came back to it, the yeast was going crazy. No overflow, but lots of bubbles. I added the salt to slow things down and 1 ½ c. of the whole white wheat flour. I covered the bowl back up and let it go for an hour or two.

When I uncovered the bowl, I saw the dough was enormous. My guess is the yeast that went dormant on the spent grain came back to life. I added the remaining 2 cups of flour, did minimal kneading (to save myself the trouble), and coated the dough ball with some unmeasured oil. Covered back up, the yeast went at it for a couple more hours.

Later on, the dough was pressing up the plastic wrap, so I figured it was time to bake. I preheated the oven to 500°F and formed by loaf by light kneading and stretching. I covered the outside with some more flour to prevent sticking to my cutting board. I covered it with the plastic wrap again and let it puff back up, which it did very quickly. After roughly 25 minutes, I popped the loaf into the oven. It didn't get as much oven rise as I was hoping, but whatever. Ten minutes in, I turned the temperature down to 400°F and baked for another 25 minutes. Once out, I brushed olive oil on top.

Straight out of the oven is the best, but it's still good later on toasted. I used white wheat instead of the usual red wheat (aka "whole wheat flour") as an additional experiment. Red is stronger tasting than white, and I was hoping to catch more of the grain flavor. There's not a whole lot of it, so I'll probably introduce some red next time.

The grain adds a fiber munchiness that I like. It's very soft and wet, so don't think it's a dry fiber log. I think the 1:3.5 ratio of grain to flour (by volume) is good. I wouldn't really want to increase the grain. If anything, I might want to try some other flour combinations and add seeds.

Update (2012-09-27)
Ben tells me that, when brewing beer, the yeast is only added after the grain is removed. It sounds like it's wild yeast then that coated the grain while it was sitting out for a couple hours to cool.