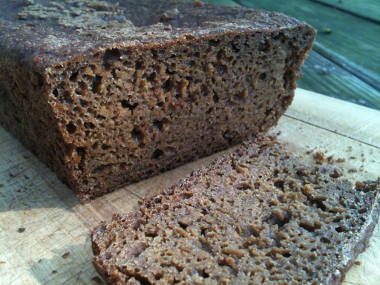 If you recall, pumpernickel was on my short list of the next breads I wanted to bake. (I think I mentionned that.) A year or so ago, I searched online for a traditional recipe and there wasn't one that didn't use cocoa and/or molasses to fake the dark appearance and flavor. I couldn't find anything. This time, I found one. Something called "Westphalian pumpernickel" and replicated from a book by other people. I followed that recipe with no changes except halving it to make a single loaf.

Now, I did notice the addition of molasses, so I was about to write this recipe off. But then I saw the amount: it's not that much for one loaf. I suppose it'd have to do for my first attempt with this style.

Also interesting: no yeast. So it surprised me that the dough did in fact rise. More on that later.

To quickly run through the directions: I oiled a loaf pan, mixed the dry ingredients in a large bowl, mixed the wet ingredients (except oil) in a medium bowl, and combined them. Then I coated and kneaded in the oil. I poured/pressed this dough into the loaf pan and covered it with plastic wrap and a small towel. I left it alone for 24 hours. A full day.

When I came back to it, it was maybe twice as big as when it started. I guess the local yeast in the air got in there and took off. I preheated the oven to 225°F, removed the plastic wrap and replaced it with foil, filled another small pan with water and placed it in the oven. After 15 or so minutes, I guess, I put the loaf pan in the oven and let it go for 4 hours. At that time, the kitchen was smelling pretty awesome. I raised the temperature to 325°F, removed the foil, and continued the bake for 30 minutes. I tested the crust to make sure it was crispy. I removed the pan and let it cool for 5 minutes before turning it out to cool on a wire rack.

I didn't eat it right away. I finished baking it around noon yesterday and only cut pieces off this morning for breakfast. I sliced some and toasted them, spread some ghee on top, and, for lack of anything else in the house, spread some strawberry jam. (I really want to eat this with mustard and eggs.) I haven't had that many types of pumpernickel, so I don't know how this fits in. But it's really good. There's a lovely, crispy caramelization and it's not as dense as I expected it to be. As far as the process of making a bread, this one is really easy and worthwhile.