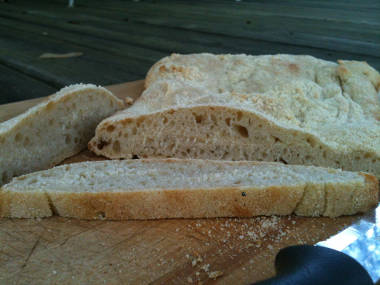 For the third trial run of making ciabatta, I went with bread flour instead of any kind of whole wheat flour. I kept the recipe the same otherwise.

I decided to also change the process a little. Last night, I started the yeast in a bowl with 1 c. water and ½ c. bread flour. Today, I added all the other ingredients except the oil (which I added later). I used my "hand-paddle" technique and whipped the dough around for about 15 minutes. I guessed that was enough time and then added the olive oil, just to coat everything. I covered the bowl with plastic wrap and let it rise for 2 ½ hours.

At that time, I preheated the oven to 500°F. I transferred the dough to a heavily floured (with semolina) cutting board. I coated the top with more semolina. That sat around for 45 minutes. Then it was a moment of extreme trepidation. How was I going to get a dough puddle into the oven onto the baking stone without ripping everything up? I figured it had to be done, so I opened the oven door and grabbed as much of the dough together as I could, slinging it onto the baking stone and shutting the door. It baked for 10 minutes, I rotated the bread 180 degrees, and it baked for another 5 minutes or so. I took it out to cool.

At first glance, it looks like a puffy, misshapen pizza crust. I sliced it and didn't see the air pockets I was going for. Ate a piece, and dang it's good. Dangerously good since it's mostly white flour. But I will have to eat it within a day or two because there's so much surface area, it dries out quickly.

How can this be improved? I'm guessing at the mixing stage to create even longer gluten strands than I was able to make with just my hand. Everyone in the world seems to use a stand mixer. I read the dough can be put in one and mixed for up to 30 minutes, so there's no way I was able to come close. I think at this point, I'll turn away from a Trial 4 and move on to another bread style. Pumpernickel and challah are yet to come before trying focaccia again.