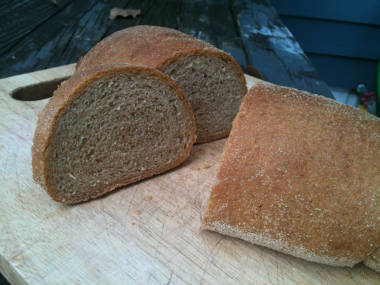 I've been putting off making ciabatta forever. I bought a bag of semolina flour long ago, and it's been sitting in the back of my top cupboard ever since. I think I've been discouraged with my one and only attempt at focaccia, which my bread book says is easier than ciabatta. My focaccia failed horribly, but then again, I didn't use this bread book of mine (The River Cottage Bread Handbook).

The book's recipe makes 6 loaves, so I cut in third to make 2 loaves. It also calls for 00 flour or white bread flour. I went with white whole wheat to keep the high gluten content. I wanted lots of giant air pockets, if possible. Surely gluten helps that, right?

Ingredient-wise, this is easier than bread I normally make. Process-wise, it was more involved. It started off with mixing the dry stuff in a large bowl then adding water and 1 tsp. of the oil. Forming a claw with my hand, I mixed and beat the dough for 5 minutes, which is no small feat. It wasn't too bad, but it got me tired. I covered the bowl with plastic wrap and a towel. This was at 9:30. Every half hour from 10:00 until 12:00 (inclusive), I added 1 tsp. olive oil, folded the dough in half in one direction and in three in the other, and recovered.

At 12:30, I put the dough on a semolina-dusted cutting board and cut the dough in half. For each piece, I sprinkled some more semolina, rolled it up into a log, and flattened and stretched it into a roughly 4:1 rectangle. Sprinkled some more semolina on top and covered them again with plastic wrap. I preheated the oven to 500°F for about 30 minutes while they puffed up.

When ready, what I probably should have done next was lightly tug on each one to stretch them a bit longer before putting them on the baking stone. I baked them for 10 minutes before dropping the temperature to 400°F for the final 15 minutes. I took them out, drizzled some olive oil on top, and let them cool.

I've been following the methods in this book for a while now, and I think I can now say that, visually, I don't like the log-rolling thing he recommends. It makes the ends look like a cinnamon bun. I also wonder if this is what caused the bread's air pockets to be so small. This isn't ciabatta. It tastes good and has a good crust, but the large air pockets didn't form. This has been something I've always noticed, and I wonder if I should change up my kneading/forming method.

Update:
I'm thinking I had nowhere near enough water. Also, the rolling squeezed out all the air bubbles, and I didn't let the dough rest long enough before baking. I'll follow this recipe or this other one next time.