Making a metric ton of muffins 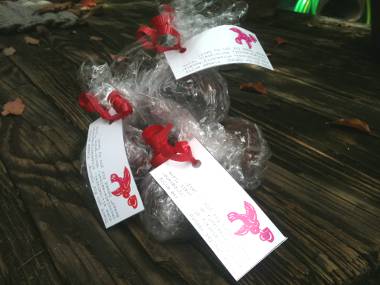 I managed to get tricked into making muffins as parting gifts for my wedding reception. The initial idea was to make a groom's bread, which would really have to be several breads. I considered making different types: a rye and caraway, a spelt something or other, something with barley. It was soon decided that I would make smallish loaves of my world famous strawberry-banana bread. This was downgraded to muffins when decently sized loaf tins couldn't be obtained. We only had two half-dozen pans, so we bought a full-dozen pan at Goodwill when we were dropping some things off. (No, not wedding gifts.)

Our invitations didn't include RSVP cards for some reason. I guess we wanted to keep it informal. So we had to guess the head count for the wedding planner as well as for my recipe. I decided to make 84 muffins. This is 7 dozen. As much as I prefer working in base-10, the tins demanded base-6. I baked a trial half dozen the Sunday before the Saturday wedding. It just so happened that my bread recipe equals one dozen. I did some fancy fraction math to compare my existing muffin recipes (the banana walnut and the pumpkin muffins) with my bread recipe. The flour content of the bread recipe is twice the (half-dozen) muffin recipe, so it wasn't hard to do said math. I double-checked by comparing the baking soda amounts.

I introduced carob chips into the trial run. They lacked the chocolatiness that we were going for, so I decided to go with actual chocolate chips in the final run. Also, I used ghee in the trial and changed my mind to use butter instead. Finally, pecans were changed to walnuts since they're a ton cheaper.

The next thing to do was multiply the bread recipe amounts by 7, since I wanted 7 dozen. I made a grocery list based on this because I didn't have enough bananas, strawberries, chocolate chips, cinnamon, agave nectar, whole wheat flour, and butter.

At the store, I soon realized the bulk of the cost would be strawberries. If you're not familiar with the Produce Dirty Dozen, it's a list of the veggies and fruits with the most pesticide residue. Strawberries are #3 on this list, as in third most contaminated. I have a mobile app that tells me there are 54 chemical residues on strawberries: 9 known/possible carcinogens, 24 suspected hormone disruptors, 11 neurotoxins, 12 developmental/reproductive toxins, and 19 honeybee toxins. (These numbers don't add up to 54 because some chemicals are in different categories of bad.) Organic strawberries only have 6 total chemical residues. Was I to sacrifice the health of our guests to save some cash, or would I bake for others as I bake for myself?

We decided to get bags of frozen organic strawberries, saving a tiny bit over fresh organic. (I think this decision may have caused the muffins to be less strawberry-y, but I'll get to that soon.) We bought 15 organic bananas. They aren't that much more expensive than conventional, but the ones that were available were pretty green. The recipe tastes best with super-ripe, but it just wasn't meant to be.

All the muffins needed to be baked, wrapped, and delivered to the wedding planner by Friday afternoon. I picked Thursday and Friday mornings as the baking times. I decided to bake 3 dozen Thursday and 4 dozen Friday. Thursday's batches could be stored in the fridge overnight. No freezing required.

My next decisions involved how much batter to mix at once and how many to bake at once. I decided to mix 2 dozen and then bake them together. It sounded like a good enough idea. I could knock out 4 dozen on Friday with two baking batches. I again did some math to work out what I needed for 24 muffins. I made an extra column on my sheet of paper. The strawberry calculation was giving me trouble because I really didn't know how much to buy at the store. The bags were measured in ounces and my recipe uses cups. I probably bought less than I meant to. Once I had the bags at home, I knew that each dozen would be a seventh of the total, but I have no scale to weight that amount out. So I guessed based on volume. (I think the Thursday dozens had less than my Friday dozens.) I drained out the strawberry juice from each bag and chopped up what seemed to be right.

I followed the mixing like my bread recipe but with the addition of chocolate chips at the same time as the walnuts. Everything was going well. I preheated the oven, filled the pans with 24 globs of batter, and put them in to bake. Here is what I learned: the new full-dozen tin makes slightly smaller muffins which bake more quickly. More importantly, the walls of the oven are really hot. In conclusion, it's a bad idea to bake 2 dozen at once. All together, I burned 8 muffins to some degree.

The last Thursday dozen baked without incident. When they all cooled, I individually wrapped them in plastic wrap and put them in the fridge. I kept the burned ones separate as Last Resort muffins.

I started early the next day since I now knew I could only bake a dozen at a time. I had 4 dozen left. I still mixed 2 dozen at a time to minimize repeated steps. Mixing all 4 at once would have been too challenging, I figured. But maybe it wouldn't have been. Who knows? Nothing more to report. Each dozen came out wonderfully on Friday. They cooled. I wrapped them. Rikki's family came over, and they added another plastic wrap layer, tying on a ribbon with a little tag attached.

And that's the story behind the muffins. Perhaps they could have used more strawberries or more chocolate chips. Maybe the bananas weren't ripe enough. But baking in bulk with a deadline is new to me. I think it went well enough overall.