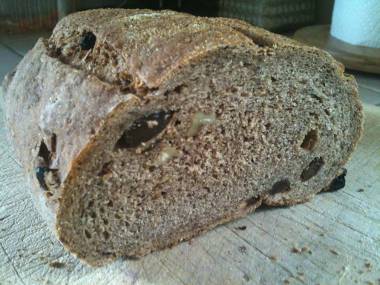 Recently, I've been gaining awareness of the unused container of raisins sitting in my fridge. I had put it there instead of the cupboard because I know how infrequently I eat raisins these days. I bought them for some recipe I wanted to try out, thinking I would eventually eat what I didn't use.

Cinnamon raisin bread: something I've always liked and have never made. I looked up some recipes to find consensus. The consensus is lots of white sugar and an egg. So I thought I'd just make the recipe up. I'll just list the totals here even though I now go through a 2-step mix (half the flour and no salt early on then add everything else later).

I had it rise and baked it like I've been doing recently, so I won't go into specifics. The bread is tasty, but could take another teaspoon of cinnamon. Some people might like their bread sweeter, so those people should make their own. The cinnamon, I think, tricks me into thinking it has more sugar than it really does. Also, this is best toasted with some butter product.