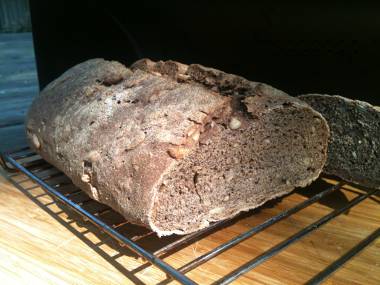 I've been enjoying buckwheat in my breads recently, but I've been limiting it to just a quarter cup for taste. This time, I thought I'd be bolder, pairing it with molasses. I also wanted to try a different method for keeping humidity in the oven for the beginning of the bake by putting a loaf pan of hot water on the broiler pan.

I started off with the intention of having buckwheat and whole wheat in a 1:2 ratio. Sunflower and sesame seeds seemed like a nice touch. I mixed this stuff in a large bowl and covered it with plastic wrap and a towel for a few hours. Later, I added the rest.

The ratio ended up only being 3:11 (or 21% buckwheat) which seemed like a better idea as I was adding more flour. I still might increase the buckwheat ratio in a future bread, but I wanted to play it safe for now.

So about my new water trial. I read it is an attempt to approximate a steam-injected oven. During preheat to 500°F, I put an empty loaf pan in the bottom broiler tray. I heated water in a tea kettle and when I put the formed loaf in to bake, I poured the boiling water in the loaf pan. I still spritzed the loaf with water, just to make sure it stayed wet enough to expand from oven rise. From what I can tell, this extra effort wasn't worth it. Hard to say because I did get a great tear down the axis along the slash I made with a knife. Maybe the extra humidity allowed it to stretch open as much as it did.