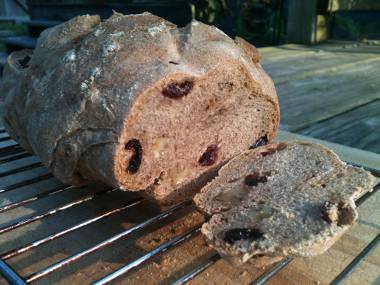 I was in Whole Foods recently and tried the bread they had out as samples. I forget the name of it, but I noted the ingredients on the little sign: whole wheat flour, rye flour, walnuts, and cranberries. Surely I could make this bread, and I've been meaning to use fruit and nuts.

Yesterday morning, I mixed this in a bowl and let it do its thing until evening:

I went with half the usual water and yeast just to try out a recipe as a small loaf. As usual, this stuff was in a large bowl covered with plastic wrap and a towel (to hold down the plastic wrap). In the evening, I added:

The rise was then for roughly an hour and a half since it was getting late. The rise affects various subtle things, but it's ok to rush it sometimes, as long as the dough is inflated. I formed the loaf, let it rest for 30 minutes while preheating, then baked for 10 minutes at 500°F. I turned down the oven to 375°F and baked for another 15 minutes.

It's similar to the store's bread. I'm still trying to figure out what gives store-baked bread that extra oomph. I think it's their oven. They probably can crank them really high while mine really only goes up to 500°F. But I don't know. I'm overall very satisfied with the breads I make, so maybe it's not a big deal.