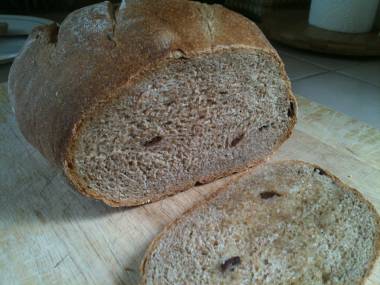 The jar of kalamata olives in the cupboard was calling to me. Wouldn't it be good to have that in a bread? I consulted my bread book and got an idea of proportions. I started things off in the usual way, but let me describe that in case it has changed since I last wrote.

I warmed the water in the microwave, poured it in a large bowl, made sure it wasn't too hot, added yeast and agave nectar, and then mixed in about a half cup total of the two flours. I covered the bowl with plastic wrap and a towel and let it sit on top of the fridge for much of the day yesterday.

In the evening, I added the salt and the rest of the flour to just the point of the dough moving away from wet towards dry. I kneaded it for a bit then added the large amount of olive oil.

Crap, I forgot the olives. I took out the jar and quartered about a quarter cup of them, adding them to the dough. I let it rise for 2 hours on the fridge, away from the dang cats.

After rising, I preheated the oven to 500°F. I moved the dough over to a lightly floured cutting board and pressed it down, rolled it up, folded it on top of itself, pressed that out, and rolled four corners into itself. (I'm sure that's hard to visualize.) I floured the board again and sprinkled on some cornmeal. I put the loaf-shaped dough on top, covered it with the plastic wrap sheet and the towel again. I let it rest for about 25 minutes.

During this time, I thought I'd try to make a corn starch wash. I don't think I did it quite right. I think it was something like half a teaspoon of corn starch with the tiniest bit of water to make a paste. (I couldn't even do that right. It was just white water.) Add half a cup of water, mix it, and microwave it for 60 seconds. Anyway, when it was time to bake, I slathered it on top of the dough, cut some slashes, and popped it in for 10 minutes. Ten minutes later, I dropped the temperature to 375°F and baked for another 20 minutes.

Fresh out of the oven, I sliced the loaf. It was salty. I hadn't realized that olives bring their own salt to the party. I wouldn't say all additional salt should be removed from the recipe, just most of it. In any case, I tried some more today. It's good with butter but even better with olive oil and black pepper.