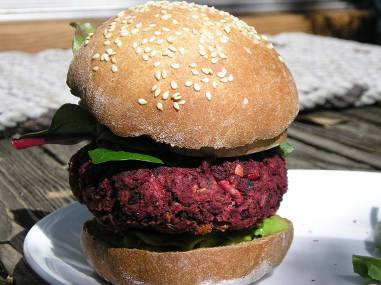 Beet burgers were in our future, so I wanted to make some buns. I'd never made them, and I figured there was something different about them compared to loaf-style bread. I pulled up a bunch of recipes to find a common theme. Cooking methods vary greatly, but the ingredients are basically the same: flour, egg, milk/water, butter, sugar, salt, and yeast.

I made up the amounts, and settled on this:

I wasn't counting with the whole wheat, and I can't actually remember if that was the amount of bread flour I went with. I just kept adding flour until it looked right and kneaded well. The dough was really sticky. I figured the dough had to be wet to get a good rise.

So, yeah. Kneaded, added oil last. (I didn't want butter.) Let sit for about 30 minutes in the oven. (The gas pilot light keeps the oven pretty warm.) Split the dough into four pieces and formed rounds. Set them on a floured cutting board and covered with plastic wrap and a towel. (The towel just makes sure the edges of the plastic wrap are down.) Preheated the oven to 375°F for another 30 minutes. At that point, I lightly pressed down on the rounds, brushed some milk on top, and sprinkled sesame seeds on top. Baked for something like 25 minutes, I think. Took them out and let them cool a bit before slicing them.

They came out really well. I was surprised because of all the people who blogged about having trouble with getting them to rise and whatnot. And I learned that I should press the rounds down more than I had because these puffed up a lot (as the accompanying picture shows). The key tips are to pay attention to the dough: make sure it's kneaded enough and make sure it's risen enough. Times are only suggestions. The dough tells you where it is in the process.