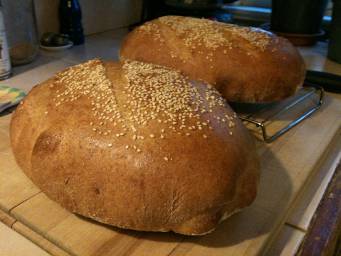 The challenge: make 2 loaves of bread that would be eaten with lasagna. Of course, semolina came to mind. I had a package of semolina flour I was going to use to make ciabatta, but I could always go buy more later for that one. Some searching turned up this recipe. With some tweaks, I used these measurements:

The package said semolina has a butt-ton of gluten, so I didn't add any white flour and only used whole wheat. I guess this is the reason why the bread turned out so awesome. Amazing crumb, as they say.

For the kneading step, I just sort of folded the dough over itself repeatedly. I wanted to make it really wet like ciabatta. This became easier once I added all the oil; it was no longer sticking to my hands and the bowl. (I don't knead on a flat surface these days. I just knead in the bowl I use to mix the ingredients.)

The rise was only 1½ hours because I was in a rush. I squished the dough down on a floured cutting board and reformed it into two loaves. (I think if I were really making ciabatta, I wouldn't press all the air pockets out like this, but more on that when I actually do make ciabatta.) I spritzed the top and coated with some sesame seeds.

I did the usual 500°F for 10 minutes and 400°F for 25 minutes. I think I may have turned it down to 375°F at one point to make sure I didn't burn the outside. When I took the breads out, I brushed on some olive oil so that the crust would get soft enough for cutting in a couple hours when we went to a family dinner.