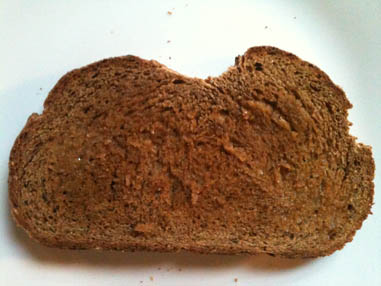 For my third bread this week, I'm using up the butternut squash purée I had in the fridge. I also felt like adding some spices, cutting back on nutmeg to a surely safe level. Since the barley flour worked out so well before, I'm adding some in this one, too, but half as much to see how that affects things.

UPDATE: During the baking, the kitchen filled up with the smell of cinnamon. It was somewhat muted taste-wise, so it should be safe to double the spices without ill effects.
While I stayed away from adding sugar, I kinda think some sweetener would make it better.
Barley is a great addition to bread. I'll keep including it in my recipes.
I can't tell there's any butternut squash. I like pumpkin more. I have some sweet potato purée I'd like to try next.