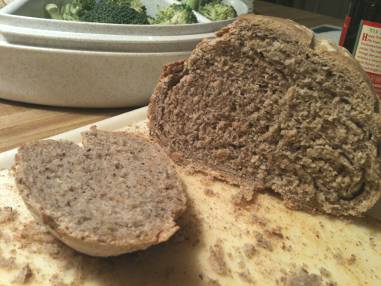 I've signed up to make three breads this week for three dinners. The first dinner is tonight, so I started last night to have half the dough "age" overnight. The trick: all the water, half the flour, and no salt. Then in the morning, add salt and the rest of the flour. The gluten will be well-formed and there will be a slight sourdough quality.

For the first bread, I wanted to make something somewhat light and less hearty than everything I normally make because I've got a different set of palates to satisfy than usual. I've researched barley and tried some in my morning cereal to see how it tastes. I've noticed that it adds a light moistness to oatmeal with a pretty subtle flavor, so I think it could work out. Last night, I wrote out my recipe on a white board before mixing. Here's the final recipe.

Last night, I mixed 1/2 cup barley, 3/4 cup all-purpose, and 3/4 cup of whole wheat in yeasty water. This morning is when I added the rest. I had intended on 1 3/4 cup whole wheat, but the dough was looking dry enough as is.

I'll add an update after it bakes and we eat it.

Because it went so well and it was late last night (Thanksgiving eve) when I started, bread #2 is going to be the exact same bread. I had wanted #2 to be a pumpkin spiced bread, but maybe bread #3 can be the new crazy one instead.