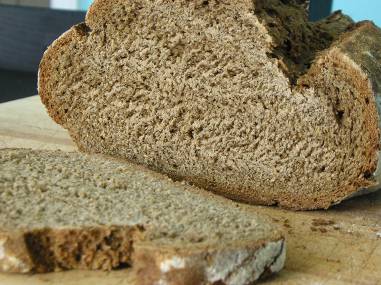 I bought a package of buckwheat flour a little while ago and made some pancakes on Saturday. They were good and weird. I used both buckwheat and whole wheat pastry flour, two things I've never used. So yesterday I decided to use the buckwheat in a bread to get a better idea of how it tastes. I found a recipe and halved it, more or less.

I mixed the water, yeast, molasses, buckwheat, and ½ cup of whole wheat in a bowl then let it rest for half an hour. Afterwards, the dough/batter definitely felt different. Probably from the gluten strands that formed during the soak. I then added the salt, oil, and the rest of the flour. I moved the thing to a floured cutting board and started kneading, adding more all-purpose as I saw fit. I pulled the dough around on itself like a jellyfish and let it rise in a bowl, covered in some more canola (rapeseed) oil, for almost 2 hours.

I pressed it flat on the cutting board and used a new technique I learned to form the dough into a cylinder. I coated the outside with more all-purpose, covered it with plastic wrap and a towel, and cranked the oven to 500°F. The dough rested for 25 minutes or so, after which I spritzed the top with water, slashed the top like a bicycle helmet, and dropped it in the oven. After 10 minutes, I dropped the temperature down to 375°F and baked for 20 minutes more.

The picture show the result after I sliced a piece off. The crust is nice and thick. Very crispy. The taste is peculiar, kinda dry, burnt, and earthy. I'm not sure how to describe it. What I wasn't too sure about was adding so much molasses, which is not so much sweet as bitter and dark, but it works out okay. I think buckwheat would do pretty well with some oats, ground flaxseed, and pumpkin seeds. I think I'll do that one next time.