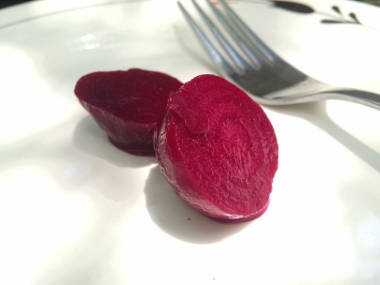 1. Cook the rinsed whole beets somehow, such as in the oven in a dish with a little bit of water and covered with aluminum foil. Maybe 45-60 minutes or something.
2. Cool the beets under some water, cut the top and bottom off, and peel away the skin. Then slice them as thick as you like.
3. Boil water in a large pot that's big enough to submerge the Mason jar you'll be using. Place Mason jar pieces in the water while it boils for a few minutes. Then take pieces out, draining the jar. (Read notes section on sterilization.)
4. When the first large pot is boiling, then it's time to boil the vinegar, water, salt, and sugar in a small quart-sized pot.
5. Stuff the jar with sliced beets, garlic, peppercorns, and caraway. Pour vinegar mixture on top, leaving half an inch or so of space. Seal the jar, but not too tight.
6. Place jar in large pot and boil for 10 minutes.
7. Remove and let cool for a couple hours. These aren't proper sterilization techniques, so put the cooled jar in the fridge. The longer the better, but they can be eaten in as soon as 1 day.

Notes:
- This recipe is for a 32-ounce Mason jar.
- If you want the beets to keep longer without spoiling at room temperature, you should consult some sterilization instructions elsewhere on the internet.